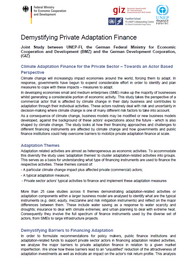 Climate change will increasingly impact economies around the world, forcing them to adapt. In response, governments have begun to expend considerable effort in order to identify and plan measures to cope with these impacts – measures to adapt.
To inform and support the climate agenda, UNEP FI, with partners, have launched a major research effort focused on Demystifying private climate finance. Its aim is to deliver answers to three questions: 1. What does the private financial landscape look like? 2. Where and how does it connect with climate change mitigation and adaptation? 3. And how can it be best mobilised by public actors?
The first issue, largely focused on mitigation, was launched at COP20 in Lima in 2015.
Published: 2015 | by: UNEPFI, BMZ, GIZ