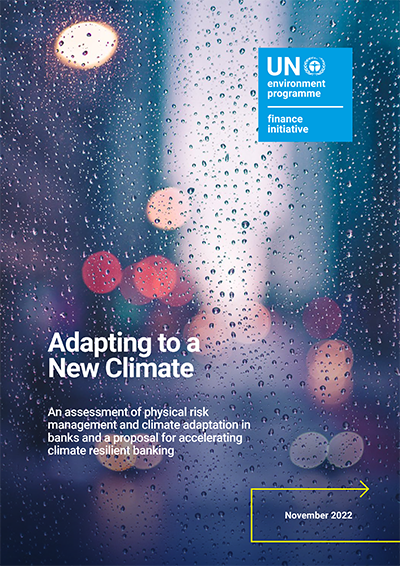 Adapting to a New Climate

With extreme events such as heatwaves, severe precipitation and droughts all expected to increase in a warming world, adapting to a changing climate requires as much attention as mitigating climate impacts. Action on adaptation is particularly salient for countries in many emerging markets and developing countries where the costs of climate impacts will far outweigh the costs of emissions reductions. UNEP’s latest Adaptation Gap Report, ‘Too Little, Too Slow’ issued just ahead of COP27 estimated the adaptation needs for developing countries alone to be up to $340bn annually by 2030.

Private finance clearly has a role to play in closing the adaptation gap, and by shaping their financing to a changing climate, banks will not only contribute to mitigating the risks from the physical impacts of climate change, but also be able to seize business opportunities as clients, markets and technologies respond to a new climate. Climate change adaptation is of particular importance to the Principles for Responsible Banking (PRB) signatories with clients in highly vulnerable regions such as the Middle East and North Africa or Latin America, or involved in sectors such as agriculture and infrastructure that will be disproportionately impacted by extreme events.

As COP27 has turned the world’s attention to climate adaptation and climate impacts, UNEP FI has assessed physical risk management and climate adaptation in banks and defined next steps towards a framework to accelerate climate resilient banking. First setting the climate context and imperative for action on adaptation by banks, this report looks at the current context of physical climate risk identification and assessment in banks globally. It then assesses current practices in two regions that will be disproportionately impacted, the Middle East and North Africa and Latin America. Finally, the paper proposes next steps and considerations for advancing adaptation in the banking sector in highly exposed regions and globally.

A PRB working group on climate adaptation will launch in 2023 to develop a set of impact guidelines and complement net-zero alignment under the responsible banking framework. For more information or to get involved, please contact Paul Smith.

Watch the recording of the report launch webinar here.