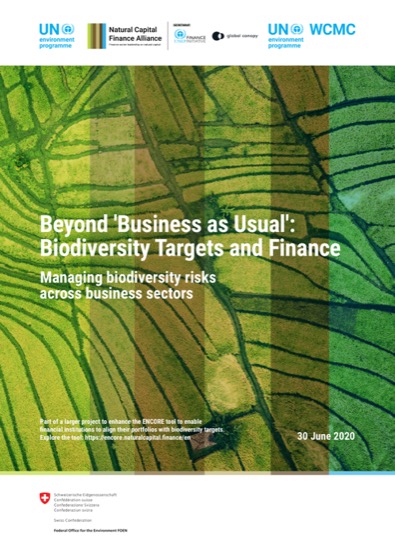 Beyond ‘Business as Usual’: Biodiversity Targets and Finance

US$44 trillion of economic value generation, more than half the world’s GDP, is moderately or highly dependent on nature, which is increasingly under threat. Biodiversity – the variation of species and genetics among animals, plants, fungi or microorganisms – is fundamental to economic health.

Download our report which shines a spotlight on the urgent need for financial sector action on biodiversity, and provides a pathway for banks, investors and insurers to get started. It sets out the 9 priority sectors with large financial flows and major potential dependencies or impacts on biodiversity, enabling you to gain an understanding of where the highest risks lie within your current activities to inform your target setting.

A step-by-step guide outlines approaches to target-setting on biodiversity for example a target of “no net loss” or “net gain” of biodiversity. This approach enables financial institutions to reduce risk exposure and create a more resilient global economy.

The report draws on the science and analyses of the online ENCORE tool and will be followed later this year by a ground-breaking new biodiversity module, currently under development in consultation with 27 financial institutions.