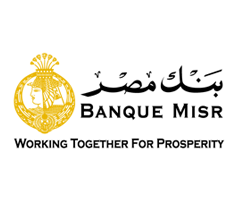 Banque Misr was established in 1920 as the first wholly Egyptian – owned bank. Today, the bank has about 14,500 employees, serving a large base of more than eight million clients in Egypt, with a total paid-up capital amounting to EGP 15 billion.

Since its establishment, Banque Misr has founded companies in various sectors, including Textiles, Insurance, Transportation, Airlines, Entertainment, and Cinema. The bank additionally supports banking and investment activities. The bank owns a big share in 159 companies that work in financing, tourism, housing, agriculture, and food in addition to other companies in the communications and information technology sector.

Banque Misr also values its regional and international presence, which includes its five branches in the United Arab Emirates and one in France. In addition, the bank’s international presence includes subsidiaries in Lebanon and Germany, as well as representative offices in China and Russia and a global network of correspondents.

As a leading National Bank with dual mandate of supporting the National Strategy while remaining commercially viable, Banque Misr has decided to follow the sustainability direction in its strategic and tactical levels during the formation of 2019 – 2023 Strategy to take a leading role in contributing directly to the Egypt 2030 Vision and the United Nations Sustainable Development Goals (SDGs).

Moreover, as the second-largest bank in Egypt with the greatest distribution footprint and the largest customer base, it became mandatory for the bank to implement sustainable development as one of its focus areas.

Why the Bank Joined UNEP/FI as a member

Banque Misr is actively seeking to embed sustainability into its strategic and operational levels. Expectation of the society is ever-increasing exponentially from the financial and business sectors.  The Bank expects to play a strong role in supporting national and international development goals, which would go beyond the traditional CSR approach and facilitate the transition to green, low carbon economy with equal opportunities within an ethical framework.

Link to more on Sustainability/Integrated report