Biodiversity is catching up with climate on the global policy agenda, motivating leading financial institutions to understand their impacts and dependencies on nature

January’s One Planet Summit marked the first time the annual gathering of world leaders was dedicated to biodiversity. While previous iterations of the conference focused on the climate crisis, this year’s summit made it clear that decision-makers no longer see biodiversity loss and climate change as two separate crises: leader after leader spoke about integrating the policy responses to biodiversity loss, the climate emergency and the pandemic.

“We can’t meet our climate targets without protecting nature,” declared Emmanuel Macron, President of France and the host of the Summit, in his opening remarks.

[su_pullquote]“We need to step up our efforts to protect biodiversity, and not just at ‘some point in time’, but now,” said Angela Merkel, Chancellor of Germany.[/su_pullquote]

“We need to step up our efforts to protect biodiversity, and not just at ‘some point in time’, but now,” said Angela Merkel, Chancellor of Germany.

“We have the tools to respond to the biodiversity crisis,” said Erna Solberg, Prime Minister of Norway. “A good starting point is to ensure we include biodiversity when addressing the climate crisis.”

Towards a global biodiversity target

Beyond strong statements from world leaders, last week’s One Planet Summit included the launch of a new High Ambition Coalition for Nature and People. Presenting the Coalition, the President of Costa Rica said the 50 government signatories are united around the goal of protecting at least 30 percent of land and oceans by 2030, a substantial increase from the current state of play: at the moment, protected areas only cover 7 percent of oceans and 15 percent of land. The new High Ambition Coalition complements the Leader’s Pledge for Nature, which has now been signed by 82 governments, after launching in September last year.

A new post-2020 global biodiversity framework is expected to be agreed later this year, and the new High Ambition Coalition signals to financial institutions that there’s growing policy momentum for ambitious action. Moreover, the concrete commitment to conserving 30 percent of land and oceans indicates where the level of ambition for nature protection may be pitched in the new global framework.

From biodiversity conservation to industry transformation

Expanding protected areas and managing them effectively is critical, but new research launched at the Summit stressed that nature-related investments need to go far further in order to tackle biodiversity loss.

Establishing protected areas and conserving coastal ecosystems is expected to require USD 176 –230 bn of investment annually, while transforming industries and sectors from nature-negative to nature-positive demands another USD 546 –737 bn of investment every year, according to the new Little Book of Investing in Nature, launched by Global Canopy. In short, around three-quarters of annual investments in biodiversity should flow towards ensuring activities that impact and depend on nature, like fisheries and forestry, are managed sustainably. 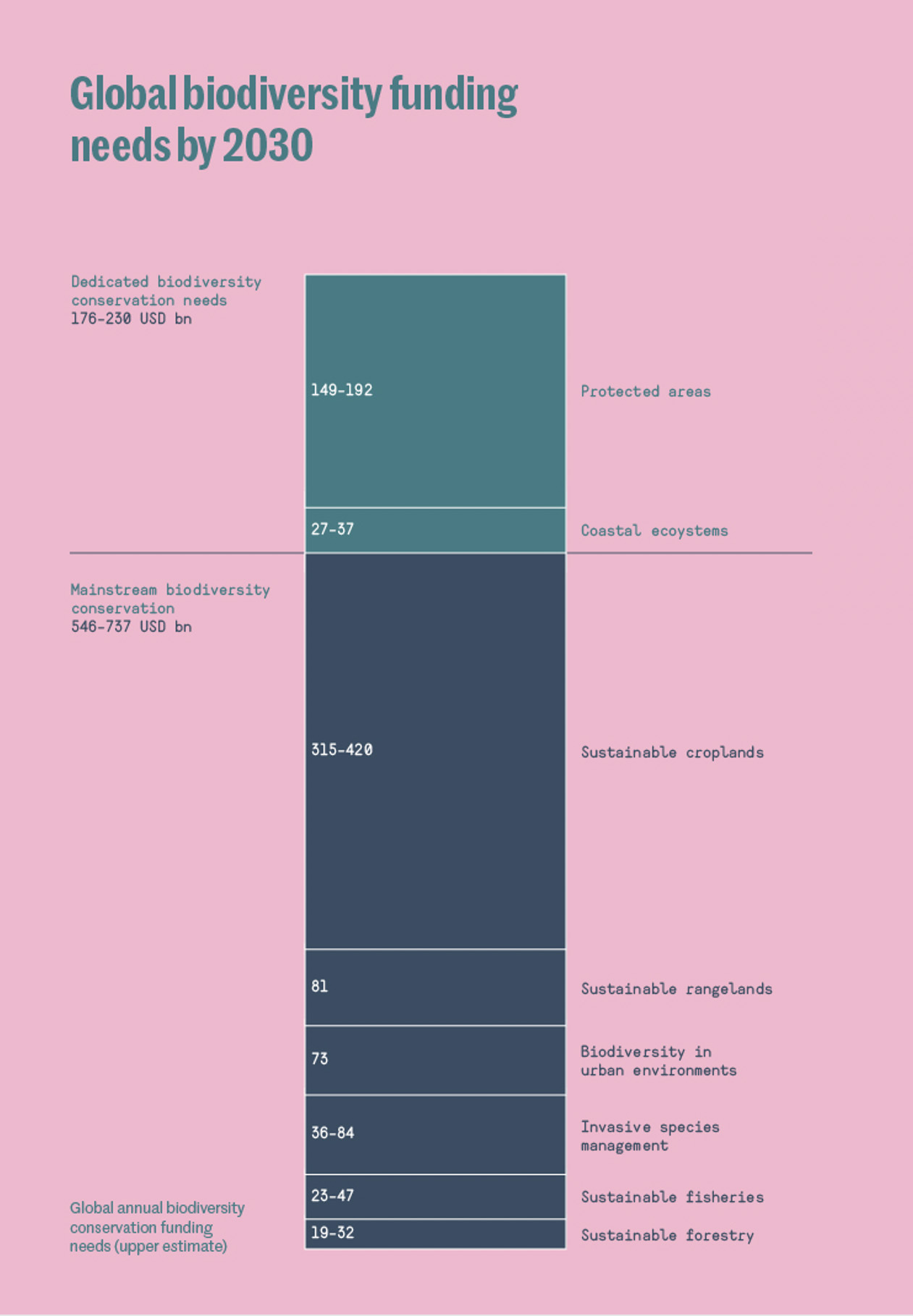 In order to facilitate this urgent transition towards industry practices that preserve biodiversity, financial institutions need to understand the impacts and dependencies of their portfolios on nature, and the related risks and opportunities.

A first step for financial institutions is to look at the impacts and dependencies on nature across the industries they invest in, lend to or insure. BNP Paribas Asset Management is just one example of a growing number of financial institutions that have used the online ENCORE tool, developed by the Natural Capital Finance Alliance (NCFA) and UN Environment Programme World Conservation Monitoring Centre (UNEP-WCMC), to investigate their exposure to nature-related risks.

A powerful database, ENCORE allows financial institutions to see to what extent 138 sub-industries and 86 production processes impact and depend on nature. Click To Tweet

Getting ready for new disclosure expectations

At the One Planet Summit, President Macron said that disclosure on biodiversity should be a priority topic for discussion at the global climate summit later this year. He highlighted the importance of the initiative to bring together a Taskforce on Nature-related Financial Disclosures (TNFD), which builds on the successful Task Force on Climate-related Financial Disclosures (TCFD). 73 organisations, including over 40 financial institutions from five continents, are working together to bring together a TNFD in the first half of this year.

“With the TCFD we managed to shift private finance and we need to do the same with the TNFD,” said President Macron. “The TNFD – which is the TCFD of biodiversity – will help us draw up a framework to measure risks, impacts and benefits of biodiversity.”

While the TNFD works on closing data gaps linked to biodiversity, the new Natural Capital Investors Alliance, which launched at last week’s summit and aims to invest USD 10bn in natural capital by 2022, illustrates that leading financial institutions are not waiting to act. Financial institutions who want to lead the shift towards a financial system that works for people and nature can use existing tools like ENCORE to build a foundational understanding of their impacts and dependencies on nature.

“The TNFD - which is the TCFD of biodiversity - will help us draw up a framework to measure risks, impacts and benefits of biodiversity.” - French President Emmanuel Macron at the One Planet Summit Click To Tweet

The NCFA is a finance sector-led initiative catalysed by the UN Environment Finance Initiative (UNEP FI) and Global Canopy.

ENCORE is developed by NCFA in partnership with the UN Environment Programme World Conservation Monitoring Centre (UNEP-WCMC). The tool is free to use.